Learn what inspires some of Dr. Lorenzo Pace’s striking artwork, his creative and colorful children’s books, and his engaging and interactive performances 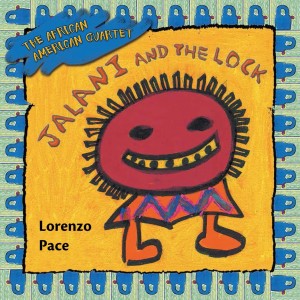 In 2001, artist Pace (best known for his sculpture Triumph of the Human Spirit, which commemorates an African burial site discovered in New York City’s Foley Square), wrote Jalani and the Lock, the story of his ancestor who was enslaved as a young boy. More than 10 years later, Rosen is now rereleasing the book, along with three new titles on the African American experience. Though fairly light on material and lacking features such as an index and table of contents, these new additions make the political personal, as Pace injects his own experiences and feelings. Dynamic, mixed-media collages add to the kid appeal. Featuring vibrant, childlike images and a rhythmic text, Jalani remains a strong choice.

When artist Lorenzo Pace’s father gave him a lock that shackled one of his ancestors who was enslaved in Africa, he turned a heart-wrenching piece of family history into the unforgettable picture book Jalani and the Lock (Rosen, 2001), which revealed the pain of slavery but celebrated the indomitable human spirit. Several years later, Pace is rereleasing Jalani along with three other books on noteworthy black figures—Harriet Tubman and My Grandmother’s Quilt, Frederick Douglass and the North Star, and Marching with Martin (all Rosen, 2015)—as part of the “African American Quartet.” Threaded with Pace’s own thoughts and impressions, these works truly let history sing.

How did you come to write these books?
I was inspired to write Jalani after the death of my father in 1991, when I received the original slave lock. I put [the lock] in the closet because I wasn’t ready to deal with it. It remained there for over two years. One day, my eight-year-old daughter came home from school and asked me, “Daddy, are we from slaves?” Her question came from being made fun of, which made her feel ashamed of herself. This prompted me to pull the lock out of the closet and to investigate my family history.

I began to write Jalani as a way to explain our history to my daughter. The next three books were inspired by the lives of key figures in our movement toward equality in American society: Harriet Tubman, Frederick Douglass, and Martin Luther King Jr.

Was it difficult to write nonfiction that had such significance to you?
All art-making is difficult but also incredibly rewarding, since you get to speak or paint your truth. The most challenging part of these nonfiction books was to find the light within 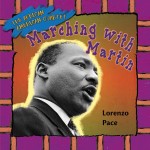 the dark subject matter so it could be presented to children without anger while preserving hope for the future, as they are our future. And yes, it was a difficult job, especially since I relived many things when working on these books: the memory of the hardship of our farming in Alabama, my rage at the assassination of Dr. King, my repulsion around the barbarity of the Middle Passage.

What was your artistic process like?
What most inspires me is being able to use found objects in mixed media to convey a personal thought or connection to all the subjects. I was inspired by the subject and the artifacts that spoke from the mists of history. Possessing the slave lock inspired me to work in oil sticks with basic forms to reinforce that solidity and finality of that ugly object. The essential patchwork nature of my grandmother’s quilt 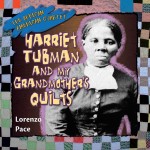 s urged me to mix my grandmother’s wonderful untrained artistry with primary source images of Harriet Tubman’s life. The documents I had collected of Frederick Douglass and the abolitionist movement told me to create mixed media collage. My experience of the civil rights movement and combatting racism in America shouted to me to paint abstractly and let the shapes and colors and energy of the brushstrokes reflect my passion.

What do you most want readers to take away from your series?
I want all kids not just to know the history of the African American experience in America but also to connect their own experience with ours and how we are all interconnected. 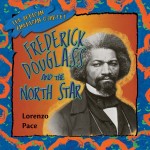 I also want kids to feel the artistic freedom that has taken me so many years to gain and find ways to liberate themselves and to tap into their own self-expression. Lastly, I have called this series the “African American Quartet” because I play jazz music in my book performances. I want kids to listen and see how these books interact with one another, like a jazz quartet riffing on recurring themes and musical pathways. I hope that these four books will help kids start a conversation within their own families and help to show how we are all connected as one human family.

Go behind the scenes for an exclusive look inside the studio of Dr. Lorenzo Pace. School Library Journal visits Dr. Pace’s Brooklyn, N.Y. art studio to learn more about his work and influences. END_OF_DOCUMENT_TOKEN_TO_BE_REPLACED

Dr. Lorenzo Pace shares the story of the slave lock passed down through the generations of his family as part of the Legacies: Contemporary Artists Reflect on Slavery series. END_OF_DOCUMENT_TOKEN_TO_BE_REPLACED

If you’d like to have Dr. Pace present at your venue, we’d love to hear from you. For scheduling information and fees, please leave your contact information so we can talk.  END_OF_DOCUMENT_TOKEN_TO_BE_REPLACED